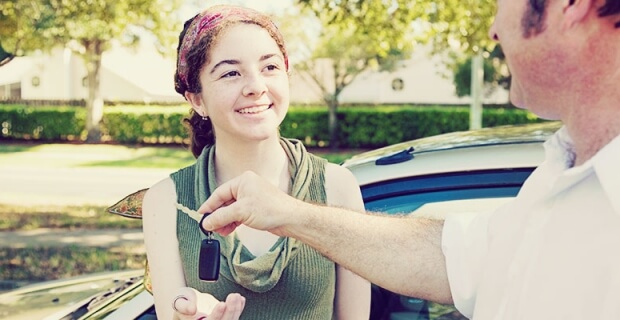 It is a widely acknowledged fact that young drivers are at a much higher risk of accidents than more experienced drivers. According to Brake.org, drivers aged 17-19 are involved in 9% of fatal and serious crashes, despite only making up 1.5% of UK licence holders. This is backed up by a Government report released in 2014 which shows that though the number of young drivers involved in traffic incidents both fatal and non-fatal are falling, the number represents a high percentage of accidents overall, especially when taking into consideration the lower number of road users in this age range.

According to Road Driver, ‘one in five new drivers are involved in a car accident within the first six months of passing their test’. With facts like these in general circulation, it is only natural that parents might greet their child’s driving test success as a double edged sword.

A survey by the Telegraph revealed that ‘62% of parents said they were worried about their children being involved in a car accident.’ This made it the most commonly shared fear for their children, beating fears that their child would be unable to get a job or would not reach their potential at school or university. Unfortunately, this fear is grounded in a solid base of figures and facts. However, a number of studies have highlighted ways that parents can affect their children’s driving and help decrease the risk.

How parents affect their children’s driving

Though there are driving lessons and tests in place to ensure that new drivers are road safe, there may be more that parents can do to ensure safe driving.

A study on the influences on youthful driving behaviour lists a number of factors which contribute to a higher risk of accident. Parental influence was highlighted in the paper as being a notable resource. The study suggests that ‘from birth on, most youngsters are driven around in a car by parents, and their perceptions about driving are being formed. People drive in ways similar to their parents’.

There has been research that reveals that children as young as 5 years old can be influenced by the ways their parents drive. The Transport Accident Commision (TAC) in Australia set out with a campaign in 2015 to directly address this influence and prompt parents to set a better example when driving. This is supported by a recent article by Express, which reveal findings that of 1,000 parents surveyed, ‘around a quarter (27%) admitted that they had picked up bad habits and forgotten what they were taught.’ Poor driving advice on breaking, gear changes, and maneuvers were just some of the things that parents were quizzed on but displayed an alarming tendency to give incorrect or misleading responses to.

From these surveys it is clear to see that one of the first ways that parents can influence their children’s driving habits is by setting a clear precedent of safe driving, and becoming a positive role model for their learning.

When it comes to driving, environmental influences, and more specifically parental influences, are just some of the many pressures. Teenagers undergo various biological and emotional alterations during their teenage years and this can make them more susceptible to influencers, be it parental, societal or peer driven.

Though it is impossible to have complete control over who a young adult talks to or how they act, ‘parents can set more realistic restrictions on their novice teen drivers to enhance their safety’.

Personally educating your children and making them aware of the risks of driving is an easy way of gradually giving them more knowledge and awareness of road safety, in addition to that which they receive through tests and schooling.

Additionally, playing an active role in warning or reducing driving in statistically higher accident prone environments, such as driving on country roads or late at night, may also help. In summary, the study stated that ‘parental involvement seems essential, and community involvement will enhance any program’ in reference to creating new plans to tackle young adult’s risk when driving.

Getting involved in their driving education

One of the popular trends of the research we have outlined in this article indicates the positive impact that parental involvement can have to a young adult’s driving habits. This can take numerous forms, from taking regular trips out with someone who has just passed their test, to taking a stance on driving in dangerous conditions.

By having active involvement in their child’s driving habits it is possible to help negate the risk of driving and give peace of mind to worried parents.

Insurethebox is a leading telematics insurer. This means that we fit black boxes into the cars we insure, which monitor driving behaviour. The feedback is easy to monitor and read, and can help parents be more involved in a young adult’s driving and address areas flagged for improvement.