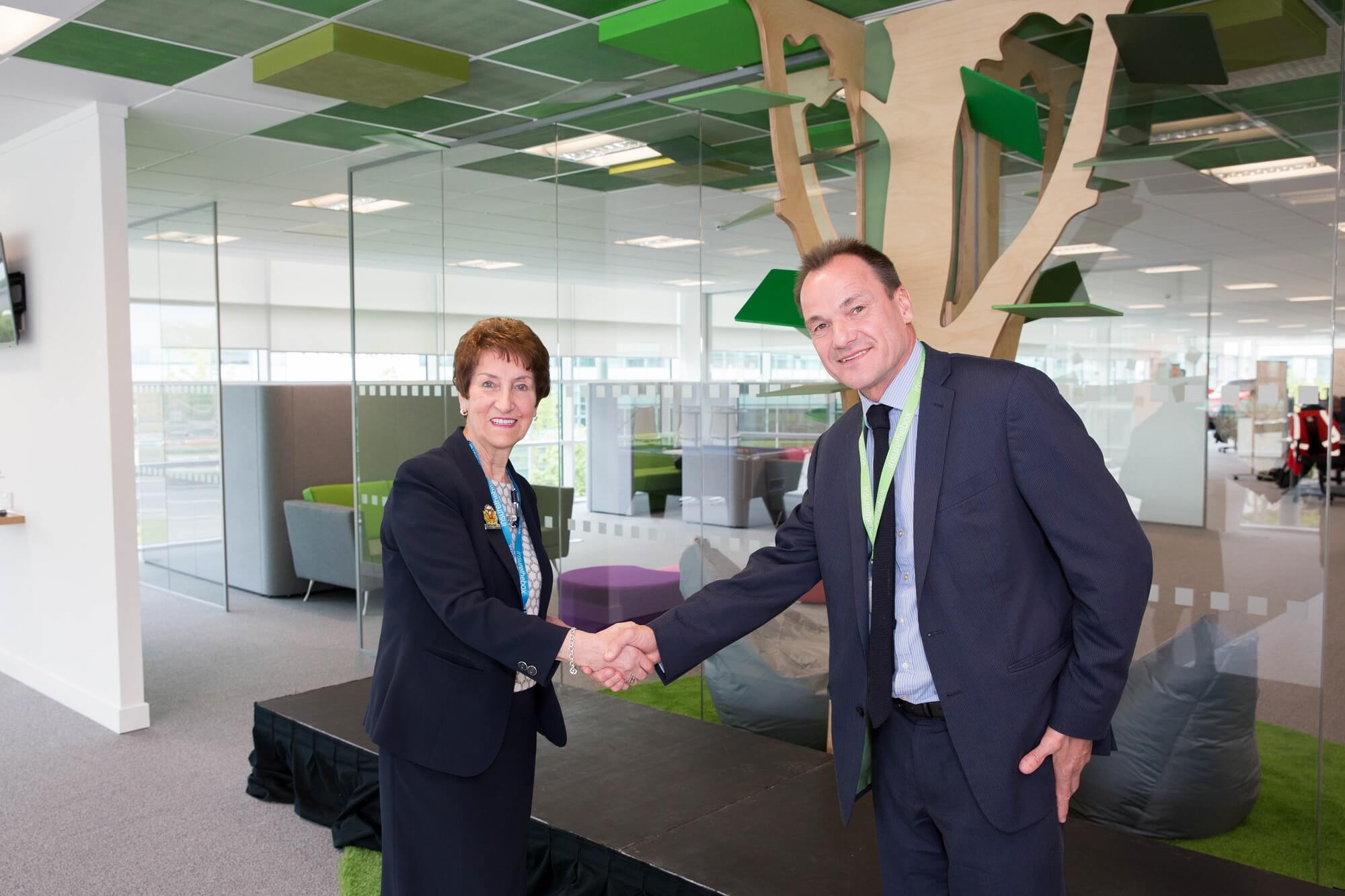 Global pioneer of telematics-based car insurance, Insure The Box, has marked its continued investment in its North Tyneside operations, with the official opening of its expanded and improved offices at Quorum Business Park, where it has been based since 2010.

Mrs Norma Redfearn, Elected Mayor of North Tyneside joined Mike Brockman, Founder and CEO of Insure The Box to cut the ribbon to mark the launch of the expanded office space.

Currently employing over 300 people, the expansion sees Insure The Box take the majority of the space in building Q11 at Quorum Business Park, as well as signing an extended lease. This underlines the company’s commitment as a major employer in the area.

At the event Mayor Redfearn said: “Insure The Box has made North Tyneside home for its operations since it started in 2010 and it’s fantastic news that the business continues to value the skills and enthusiasm of the people who live in the area.  This office expansion marks exciting times for Insure The Box as it embarks on the next stage of its business development.”

Mike Brockman, Founder and CEO at Insure The Box, added: “The expansion at Quorum Business Park, and the signing of a 10 year lease, is significant on two fronts. Firstly, it gives us the space to grow as we build on the success of our established telematics insurance proposition. Secondly, by taking over additional space in Q11, we have had the perfect opportunity to create a working environment that is truly dedicated to the Insure The Box ethos, thereby creating an engaging and interesting place for our employees to work.

“With this expansion, we are now able to open up our business to even more talented individuals interested in joining our North Tyneside team as we continue to lead the market in telematics-based insurance.”

Insure The Box is the leading black box car insurance provider among the 17-24 year old age group and holds the largest volume of driving data for the UK telematics insurance industry, harnessing over 3 billion miles of driving data delivered directly from customers’ cars.

With a clear objective to change the way insurance serves young drivers and to help support safer driving in this high-risk age group, Insure The Box installs telematics (or black boxes) in the vehicles of its policyholders, and is able to offer insurance premiums that are based on the driving behaviour of the individual, meaning safer drivers can earn rewards and prove they should pay less at renewal. Since its launch in 2010, it has sold over 750,000 policies making it the longest continual black box insurance provider as well as a world leader in telematics insurance.

The expansion at Quorum Business Park means Insure The Box is bringing all of its North Tyneside staff under one roof, enabling even greater communication and collaboration across teams and departments.

“In order to ensure that our staff needs were properly addressed we ran internal surveys in order to better understand what our employees wanted”, continued Mike Brockman. “And our employees had direct involvement in the design of the workspace – from the re-design of kitchen and recreational facilities to the creation of additional formal and informal collaborative meeting spaces, as well as a private space for those who wish to take prayers during the day and new mothers who want to return to work.  It has been a tremendously exciting process.”

Also commenting on the expansion, Fergus Trim, CEO of Quorum Business Park said: “It has been fantastic to see the growth in jobs since Insure The Box set up at Quorum in 2010.  Now taking 50% more space and making a new 10 year commitment is a great milestone in the continued success of the business.”