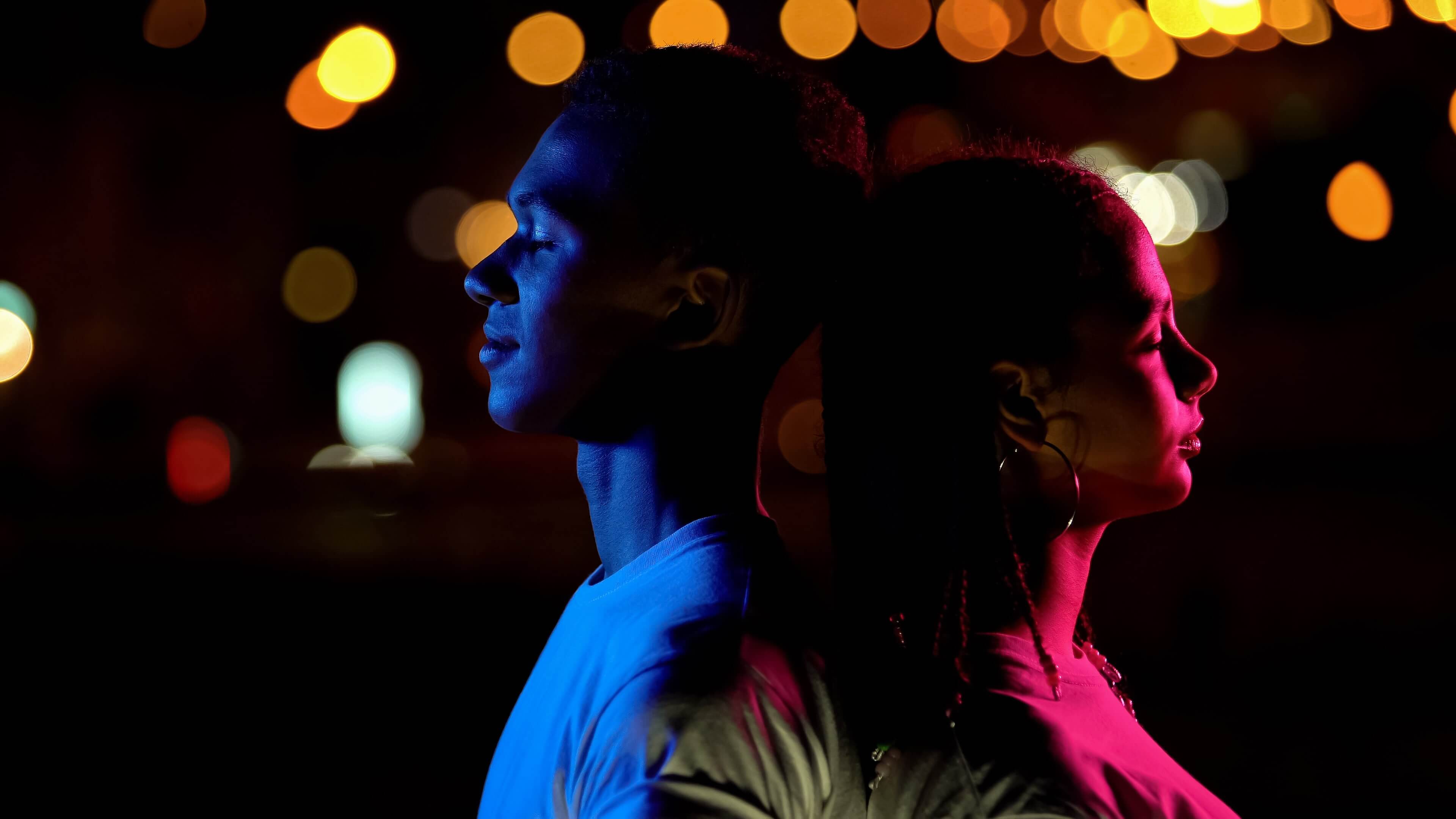 COMPARISON OF DRIVING IN YOUNG MEN AND YOUNG WOMEN

The age-old question – Who are the better drivers? Young Men or Young Women?

We have decided to tackle this question to settle this hotly debated subject matter once and for all.

The verdict is based on over 5 billion miles of driving data from insurethebox customers. That is similar to over 11,511 trips to the moon and back – whichever sounds better to you.

We have used specific criteria, which relies on a variety of factors, including: Miles driven, Speeding propensity, Bonus Miles earned and Bonus Miles earnt on the motorways.

We promise that we will judge fairly, based on facts1 alone.

Men are often fairly or unfairly dubbed as the speediest drivers, without any due care for the laws of the road, depending on your viewpoint.

We all probably know somebody who instantly springs to mind, with severe bouts of speeding, and recklessness on the roads. But what gender are they?

The number of instances related to speeding offences names Young Female drivers as the most speed-conscious gender, whereas Young Males live up to their infamous reputations as speed demons on the road. 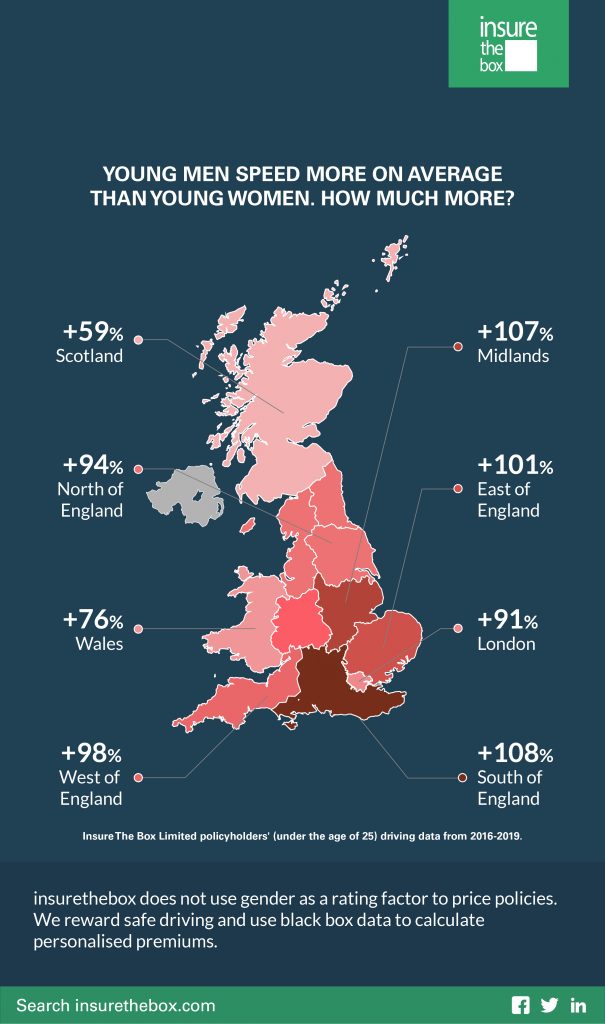 Of course, this does not ring true for every member of this specific gender, however, it does indicate a higher propensity to have your back firmly pressed against the seat, clambering towards your metaphorical brakes if you decide to get in the car with a male driver. This rings especially true for younger men, who demonstrate 94% more instances of speeding than their counterparts do.

→  What else does the data show us?

However, we do not discriminate against Young Male drivers – the evidence points towards a higher probability of speeding for men up until 40 years old.

So men, before you start pointing fingers at the energy-drink yielding young lads in your local supermarket, we recommend taking a look in the mirror first.

On the other side, there are probably female drivers reading this – similarly pointing their fingers at all male drivers, with a smug look on their faces. However, you have not yet escaped unscathed. In fact, women over the age of 41 actually demonstrate a higher propensity to speed than males of the same age group do.

Women seem to have an in-built Benjamin Button effect, whereby they speed more at a later age. With men demonstrating that it takes 41 years to actually mature? Who knows.

You might be looking at this and thinking – ‘huh?’

Unless you are a customer of insurethebox, you are unlikely to come across this term in your everyday life.

Bonus Miles are rewarded on a policy for insurethebox customers to reward safer driving. What’s great is that these Bonus Miles are further used to calculate a personalised renewal premium – so, the more miles, the better chance of getting a discount! Read more here.

These Bonus Miles are acquired through data sent from the ‘black box’ fitted to your car, which looks at whether you accelerate sharply, the speed you drive, the time of day you drive, amongst other factors.

But simply explained: the safer you drive, the more Bonus Miles you gain. 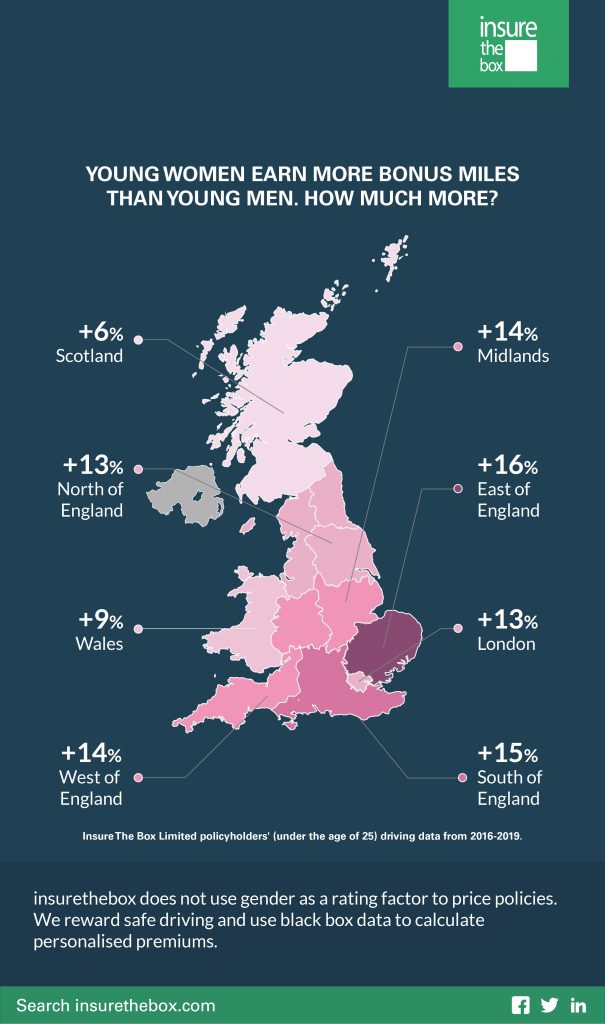 The results of overall Bonus Miles earned revealed that Young Women were superior in this specific area, thus highlighting a propensity to drive safer on the roads in the UK.

Overall Young Women earned 14% more Bonus Miles than Young Men, with the biggest difference seen in the East of England.

And this is a valuable win – insurethebox customers earning more than 60 monthly Bonus Miles receive a renewal discount of 37% on average.2

Bonus Miles Earned On The Motorway

The motorway can be a daunting experience for any inexperienced driver, and has the ability to freeze-up even the most confident driver – but statistically, motorways are the safest roads to drive on. It is for this reason that we take this factor into account when calculating Bonus Miles.

Perhaps it’s the same confidence that leads to Young Men speeding more, as they seem more comfortable driving on motorways than Young Females – by 8%. 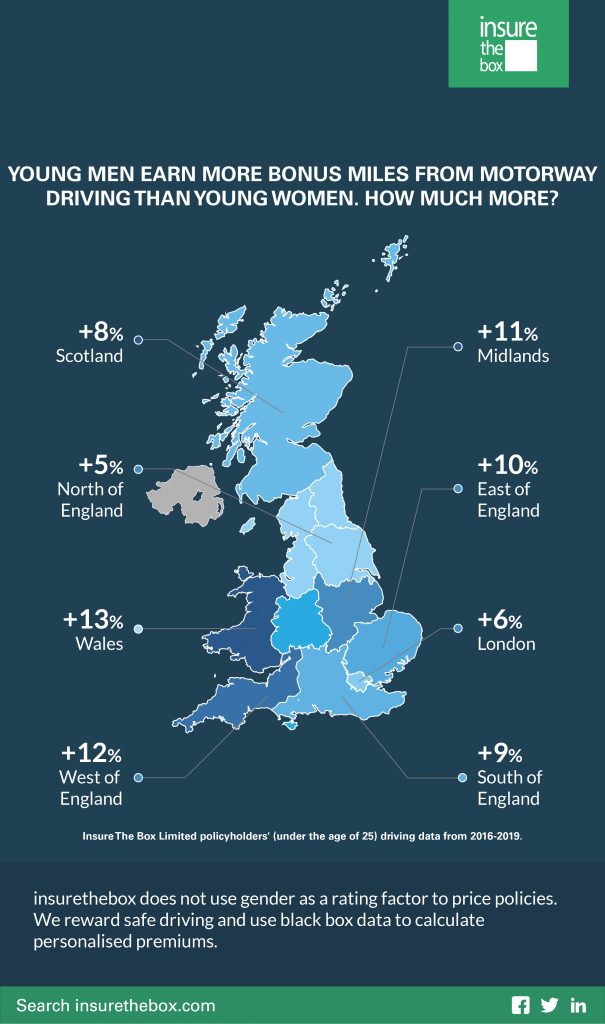 Miles driven is not a direct indicator of the capabilities and safety of any driver; it does show us however that some drivers are happier spending time behind the wheel.

This does not mean they will not crash – but experience on the road may indicate comfort on tarmac surfaces.

Young Males drive 8% more miles per month on average than Young Women, which rises to 9% for both the Midlands and Scotland. 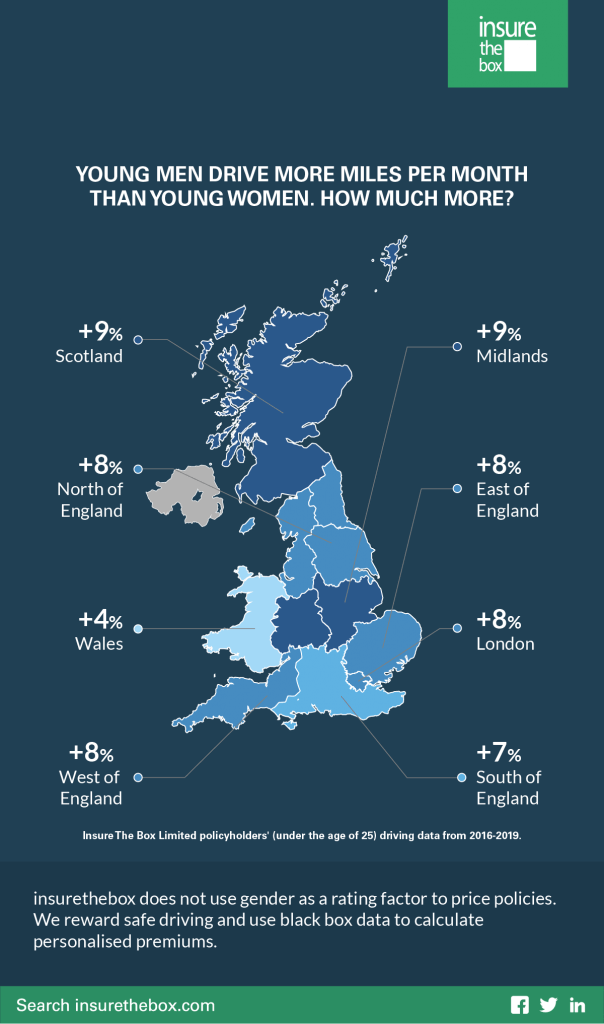 The 5 billion miles of valuable driving data have named a winner; insurethebox have successfully found that…

Young Females are safer drivers than Young Males in the UK!

They may have driven fewer miles, and less attracted to the motorways, but across the board, the data indicates that they are safer on the roads than their counterparts.

Of course, we are very aware that there are many exceptions to this rule (our diplomatic answer) – there is no confirmed indicator that one gender has a natural ability to drive better, just a higher probability of safer driving.

And to you safe drivers out there, we would like to point out that in 2019 60% of our customers received an average discount of 36% on their premium3, based on high monthly Bonus Miles. So if you’re interested in benefiting from your smooth driving skills, have a look at what we do here.

1The data on this article is based on the analysis of Insure The Box Limited policyholders’ driving data from 2016-2019. Unless stated otherwise, the data is for drivers under the age of 25.